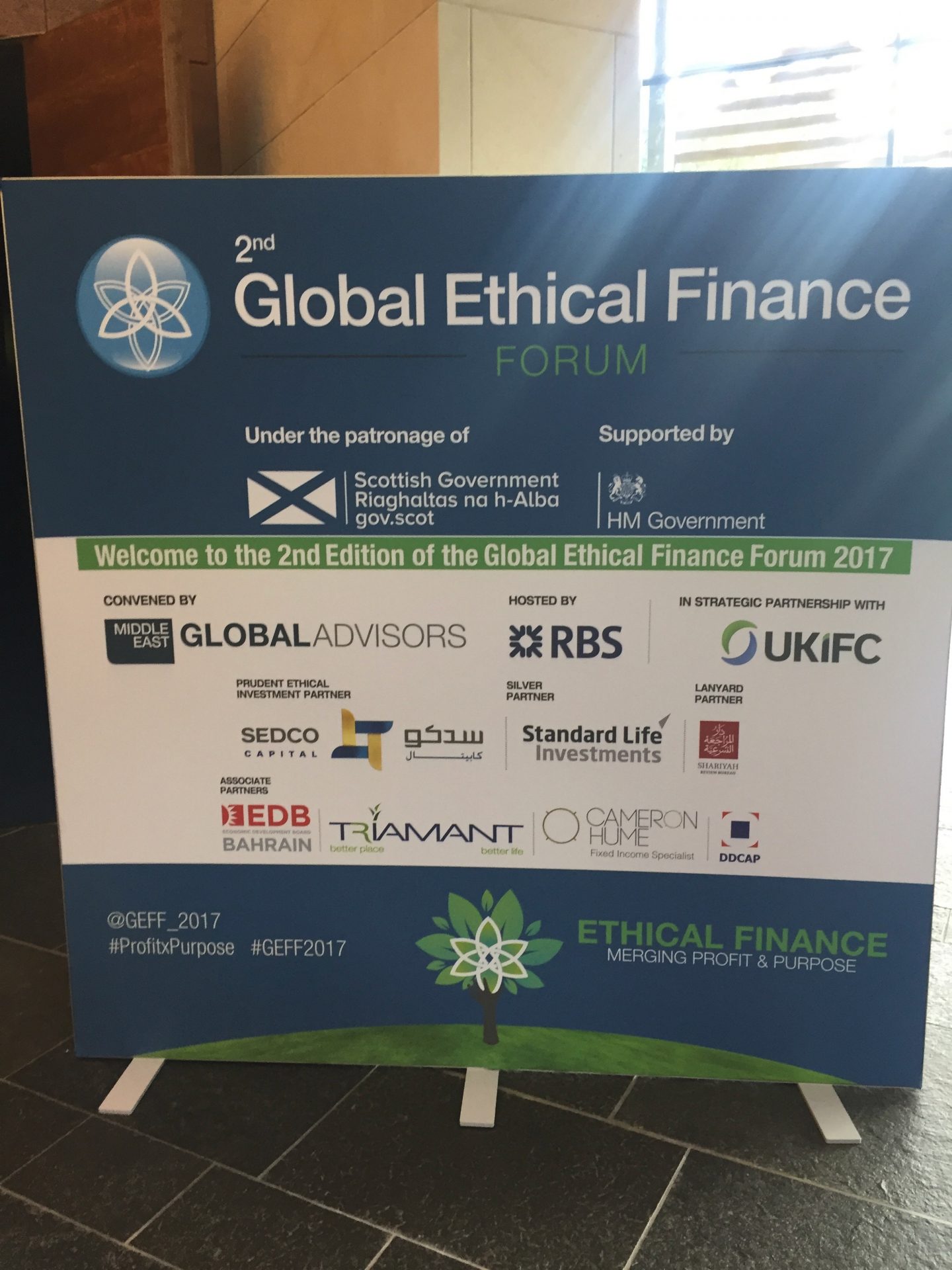 The UKIFC worked with Middle East Global Advisors (MEGA) as Strategic Partner to the 2nd Global Ethical Finance Forum (GEFF) 2017, supported by Scottish Government and HM Government, and was hosted at the RBS Conference Centre in Edinburgh. Building upon the legacy of the inaugural Forum held in September 2015, the theme for GEFF 2017 – “Ethical Finance: Merging Profit & Purpose”, was in line with the Forum’s aspiration to serve as a platform of convergence and collaboration across the responsible finance universe, and to forge a vision for a more inclusive and sustainable financial system.The forum was attended by over 300 delegates from world-renowned organisations such as the Scottish Government, RBS, Standard Life Investments, Columbia Threadneedle, IDB, Cameron Hume Limited, Impax Asset Management, SEDCO Capital, Astana International Financial (AIFC) Authority, Vigeo Eiris, The Big Issue, State Bank of Pakistan (SBP), Hermes Investment Management, Global Alliance for Banking on Values and many more.

Day One: Reflecting on the aftermath of the global financial crisis and highlighting the need of establishing a sustainable financial system, Keith Brown MSP, Cabinet Secretary for the Economy, Jobs & Fair Work, Scottish Government, said, “In the ten years following the global financial crisis there has been something of a re-alignment in attitudes among bankers and investment managers and among customers and shareholders. […] Interest in establishing an alternative, sustainable, responsible and ethical financial system continues to grow as does interest in developing a more long-term and responsible form of economic development.” Speaking on behalf of the UKIFC and explaining how Scotland poses as a fitting backdrop to host the narrative due to its strong heritage in ethical finance, Omar Shaikh, Advisory Board Member said, “Globally the city is a leading financial hub and within this, Edinburgh is a key location for asset management and banking. With Scotland’s proud heritage in prudent finance through the mutual life companies, origins of the savings bank movement, I believe that Scotland presents a natural place to convene and host this international dialogue which is pertinent now more than ever.”

Stressing on the massive opportunity that lies for mainstreaming ethical finance, Lord Sheikh, The Baron Sheikh of Cornhill and Patron of the UKIFC, said, “A fundamental part of the UK’s economic success strength stems from bilateral trade. This will be more important than ever before as we embark on a new era for our country post-Brexit. In particular, I believe that we must now seek greater economic and trade ties with our friends from across the globe and forge new trading agreements. In this context, the APPG believes that Islamic and ethical finance can offer a gateway to building new relationships and accessing new markets.” Day Two: In an exemplary keynote address and what was possibly a fitting case study, Jameel Ahmad, Deputy Governor, SBP, took the audience on Pakistan’s journey to embracing financial inclusion, wherein he spoke about responsible finance and its pre-requisites and cited some informative statistics highlighting Pakistan’s global recognition in embracing financial inclusion. He further expanded on State Bank of Pakistan’s impressive strategic approach towards responsible finance, in particular strengthening the framework for microfinance consumer protection and the national financial literacy programme being rolled out. He also took into account the obstacles that may pose a hindrance in achieving the goal of effective financial inclusion.

In a powerful and fitting closing keynote address, Nigel Kershaw, Chair, The Big Issue, said, “There is a lot of talk about ethical finance and in particular ESG and social impact because it’s talked about primarily by people involved in the financial sector. I believe the democratisation of capital is extremely central to what we do. Quite often, the discussion is top-down supply and product-led and for me, it often misses one of the most important social outcomes that is quite often forgotten – that’s the opportunity for ordinary people to invest and save in creating a better place to live for themselves, their families and the community around them. It’s not about mainstreaming ethical finance, it’s all about bringing the mainstream to us.”

Following the welcome and keynote addresses was the Plenary Session on the interplay between ethics, faith and finance which witnessed leading experts deliberate on how ethics should redeem its integral role within finance, beyond being just a convenient addendum.

Click on the links below to see press releases from the forum.