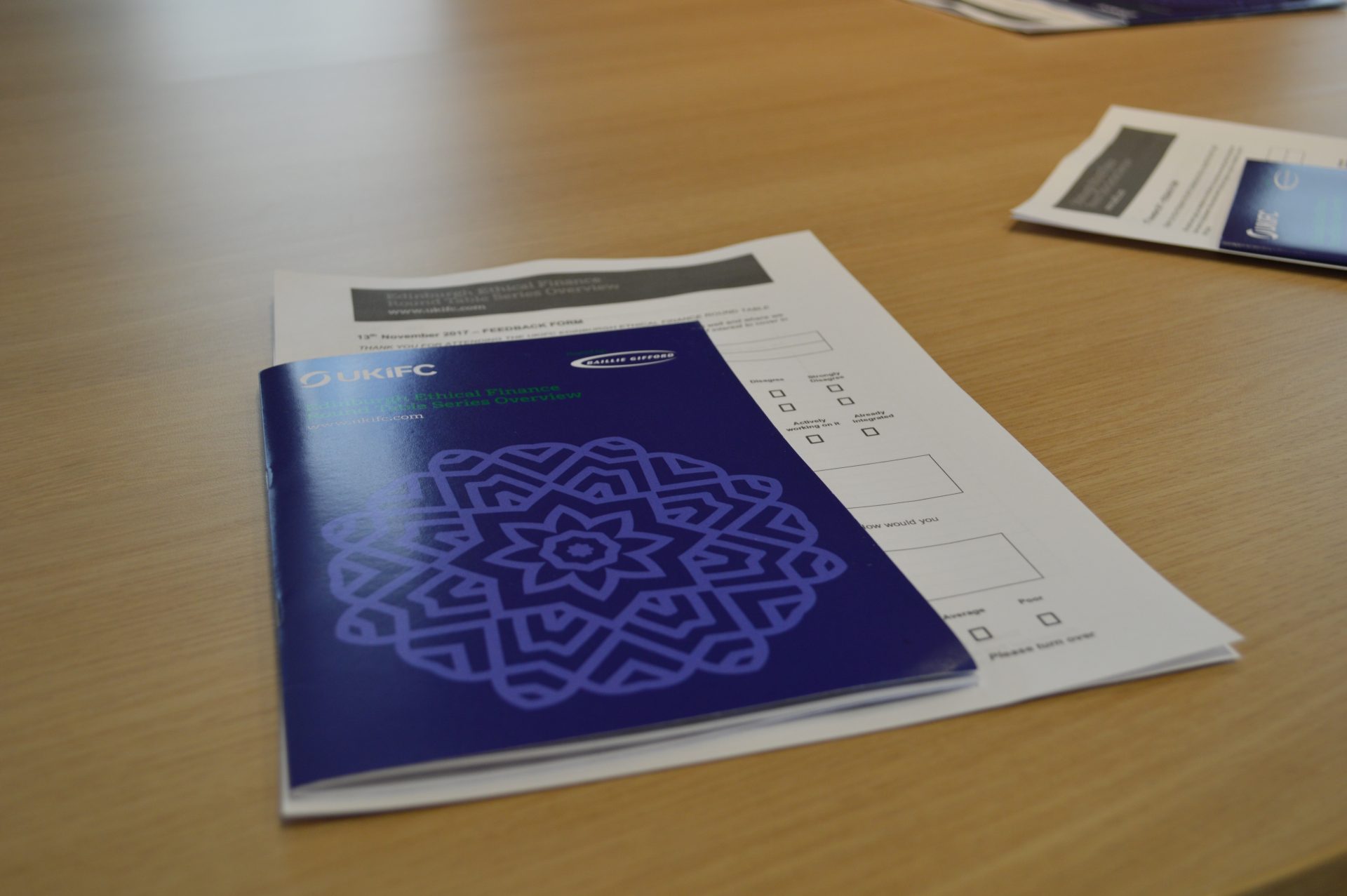 The 14th Edinburgh Ethical Finance Round Table took place on Monday 13th November 2017 for the first time in the offices of Baillie Gifford, who will be hosting the series for the next 2 years.  The topic for the meeting was the UN Sustainable Development Goals and the role the financial sector can play in making them a reality. The first presentation was given by Fran van Dijk, one of the founding partners of One Stone Advisors, who are leading consultants in the field of sustainability, operating principally in the UK, Scandinavia and the Netherlands.  Fran reported that the UN Sustainable Development Goals (SDGs) have increasingly become a focus area for their clients in recent times, both seeking to map their own strategy against the SDGs and, in some cases, going beyond that to seek to link and adapt their strategies to make a positive contribution to meeting the goals.

A major challenge in achieving the SDGs by their target date of 2030 will be finance, much of which will have to come from the private sector.  However that will bring many opportunities too both in generating revenue from change (estimated at a possible $12 trillion) and in creating jobs (estimated at a possible 380 million).  Fran then gave a number of examples of businesses which together or in partnership were actively contributing to progress – these included Triodos Bank, BNP Paribas, which was developing the “Solactive” index, and the World Benchmarking Alliance lead by Aviva, which was seeking to develop a comprehensive SDG benchmark over the next 3 years.

The second presentation was given by Lee Qian of Baillie Gifford, introducing their “Positive Change Fund” in which he played a leading role. The strategy of the Fund is to invest solely in companies making a positive contribution to social or environmental challenge, while continuing to deliver attractive returns. The Fund had only recently been launched and currently stood at a level of £12 million but it was hoped in time this could reach a value of up to $10 billion.

The view underlying the investment strategy was that companies in this category will prosper in the long-term, so this is very much a “patient capital” approach.  The management of the Fund operates by way of intensive internal analysis, focusing on the intention, business practices and product impact of the companies in question.  The SDGs form a useful framework for measuring the last of these aspects and also provide a means of communicating and reporting on the impact achieved to investors.

The discussion was then opened to the floor.

One question which was raised was whether there was a danger of the SDGs becoming merely a “box ticking” exercise or whether they were actually stimulating new investment.  In response, Fran van Dijk agreed that it was essential that the impact of investment should be closely assessed against the SDGs – in her view the forthcoming Aviva benchmark should help in this. It was noted that as yet the UK was one of the countries which had not yet formulated its policy in relation to SDGs and it appeared that the government was seeking contributors to put together chapters on each of the individual Goals.  It was suggested therefore that it might be a suitable project for the EFRT to collaborate on one of the chapters in question.

There was some comment that for certain sectors the SDGs may appear to be framed in too general and high level way.  Nevertheless the view of the presenters was that they could still form a very useful starting point for any company’s strategy.