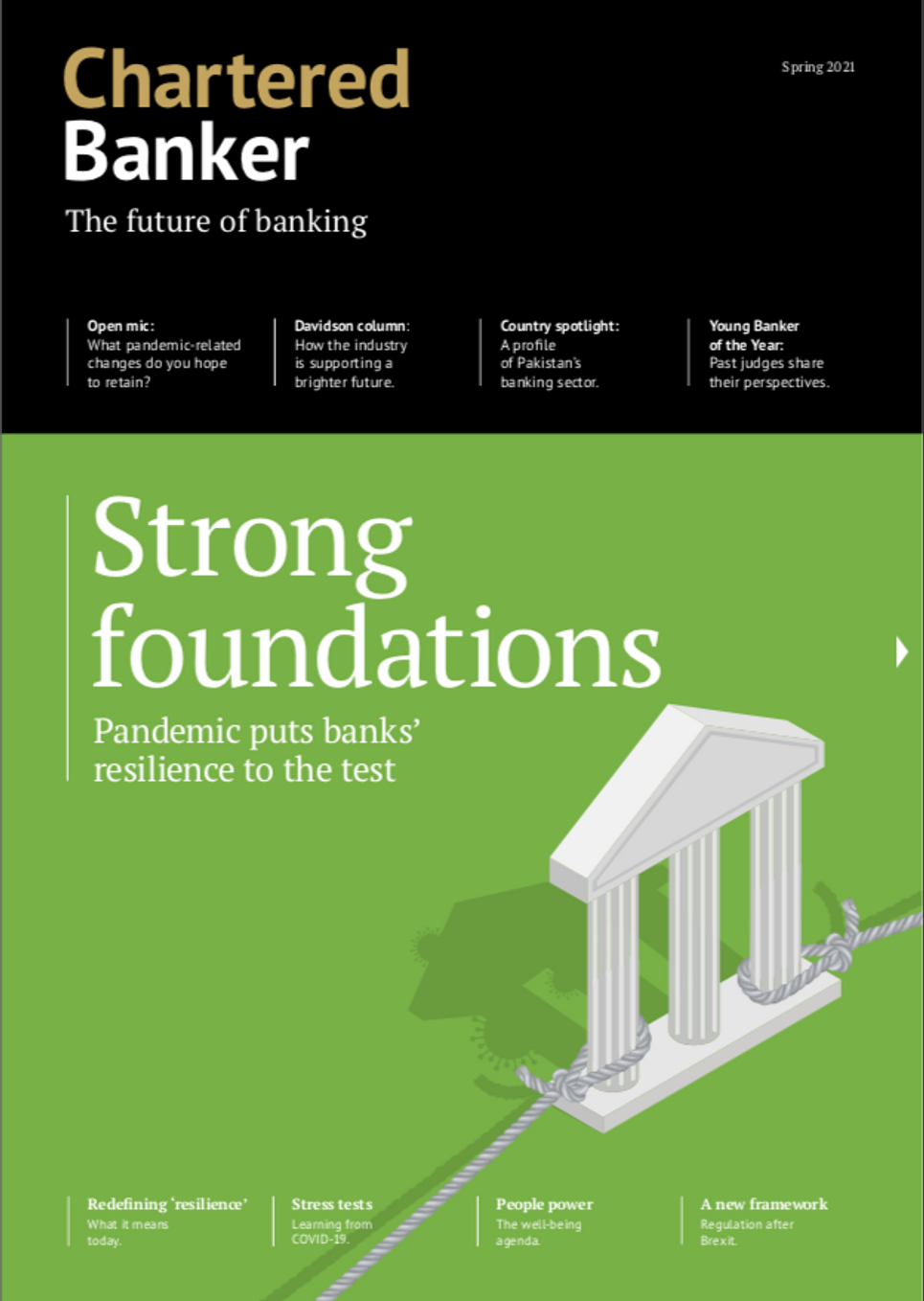 The Islamic Republic of Pakistan is by most standards a young country – its founding in 1947 was not without both complication and conflict, and historical political divisions have frequently laid obstacles in its mission to forge a path as an influential and modern Islamic republic. Today, however, the impact of decades of globalisation – along with economic growth across South Asia – puts the country in a strong position, most significantly demonstrated by its increasingly dynamic banking and finance sector.

As the world’s fifth most populous state, Pakistan is nothing if not a significant player in the South Asia region. Its current economic indicators do, however, tell a story of a country that up to now has been relatively slow to develop in its infrastructure, health and education, and business environment.

The hesitant pace of growth and development can be viewed through the lens of a challenging domestic political scene that saw the country struggle until recently to establish a more stable democracy. However, Pakistan has benefited from structural reforms in recent years that have injected new impetus into its continuing transformation as a modernising republic.

A $6.3bn cash facility from the International Monetary Fund (IMF) in 2013, for one, was designed to help Pakistan stabilise its public finances and address energy supply shortages, and measures to attract much-needed foreign investment brought inflows of $3.1bn in 2019-20 – of which the financial sector was the second-highest beneficiary.

Despite some bumps in the road, the positive consequences for banking and financial services in the country are now being felt across the board in Pakistan. The country’s central bank, State Bank of Pakistan (SBP), notes the progress made in financial inclusion across such a vast population, saying: “In June 2018, we had 64 million unique accounts in operation, which reflects a penetration of more than 50% of Pakistan’s adult population. As of June 2020, we now have 73 million unique accounts, of which 61% are active.”

These accounts are a mix of traditional branch accounts and digital/mobile platforms – the very territory that is ripe for further expansion. And, given that the Pakistan Telecommunication Authority (PTA) reports some 93 million citizens as having broadband access, the potential for further penetration looks promising.

It could be cited that there are three ways in which the country’s financial sector has managed to blossom under such a transformative environment for banking worldwide. A key piece in the jigsaw is the autonomy that SBP now enjoys in making vital monetary policy decisions. The reforms go back to 1994, with further powers being subsequently granted in 1997.

“The changes in the State Bank Act gave full and exclusive authority to the State Bank to regulate the banking sector, to conduct an independent monetary policy, and to set limits on government borrowing from SBP”, which had been enacted in the SBP Act 1956. “SBP formulates and monitors monetary and credit policy, and in determining the expansion of liquidity, it takes into account the Federal Governmentʼs targets for growth and inflation that the Bank [operates] in a manner consistent with these targets.”

Secondly, the momentum for digitisation in Pakistan means increasing the share of online banking, whether that includes retail point-of-sale payments or opening and using e-wallets issued by FinTechs. SBP has capitalised on the digital shift by collaborating with the Pakistani government to allow its citizens living abroad easy access to retail investment opportunities back home by launching the Roshan Digital Account (RDA).

But perhaps a most prominent characteristic of the financial sector here is the growth and development of a highly developed alternate – or Islamic – banking system.

As an Islamic republic, Pakistan is strategically and culturally well placed to develop Islamic finance products. It is one of the very few jurisdictions to enjoy explicit constitutional support for it, and this in turn has increased incentive and backing for its development from the state.

According to SBP, the government has used a number of legal and regulatory initiatives to help nurture Islamic banking. As part of the National Financial Inclusion Strategy, it is determined to increase the share of Islamic banking to 25% of the banking industry, and its branch network to 30% by 2023. SBP has enjoyed a pivotal role in promotion and development of the Islamic banking industry and, as a result, is recognised today as a stable and resilient segment of the overall sector.

Although often seen as niche banking instruments, Pakistan has been cannily nurturing a sub-sector of Sharia-compliant* products and services since the early 1980s, with the result that it has grown substantially in both appeal and reach.

SBP reports 22 Islamic banking institutions operating in the country, including “five fully fledged Islamic banks, one specialised bank and 16 conventional banks with Islamic banking branches”. In the financial year ending 2020, a further 361 branches were added to a network already spanning 3,274 branches in 122 districts. Lower-income citizens are also are part of the commitment to growth, with banks such as NRSP and MCB-Islamic offering a range of Islamic microfinance solutions.

S. Fahim Ahmad, a Karachi-based Senior Adviser to the UK Islamic Finance Council (UKIFC), has more interest than most in the positive impact of Islamic finance. A former senior banker with Citibank and passionate supporter of sustainable charities, he was asked to set up Pakistan’s representation to the Global Islamic Finance UN SDGs Taskforce, which aims to ensure that it can actively engage with the 17 UN Sustainable Development Goals (SDGs) and make Islamic finance part of this global initiative.

“The team at State Bank of Pakistan were easily convinced of the benefits of such a cause,” he explains. “They had never done this before, as their role is more that of a regulator. But they are ina position to manage the banks much better than I could.”

In November 2020, the Pakistan chapterof the Taskforce was launched, enrolling the support and participation of seven Islamic and conventional banks which it was felt could best drive forward the mission. Its four key objectives include enhancing engagement with the UN SDGs – but also to promote Principles of Responsible Banking (PRB); facilitate alignment tools that deliver on additional areas such as green financing and the Global Ethical Finance Initiative (GEFI); and share international experiences.

“This collaboration between SBP and UKIFC is a novel concept,” continues Ahmad. “The idea is to replicate this in other markets. We have had to catch up in many respects with developed Islamic finance markets, and this is a good chance to make up for that.”This level of engagement is a far cry from the early days when legal issues tended to slow the growth of Islamic banking in Pakistan.

Finally, after 2000, the founding of the country’s largest Islamic bank, Meezan, was made possible when the SBP agreed to scope out proper guidelines and a regulatory framework. Today, Islamic banks in Pakistan are so successful, they have a surplus of liquidity, which inevitably needs to find a home in investment instruments that are considered halal (permissible or lawful).

“There’s no doubt in my mind that there’s a huge demand for Islamic finance products,” adds Ahmad. “The impact of wider regional change in 1979-1980 had fundamentally changed the relationship we have since had with Islam, and the younger generation is, by extension, now more into Islamic banking.

”However, there is still no global uniformity among Sharia scholars about the acceptability of different products – and there is extensive room for growth yet. What will make Islamic banking take off in Pakistan? Ahmad argues that this will happen if the government uses it on a large scale, for example through sovereign or corporate bonds in sovereign sukuk.

“Social good is a key part of Islamic finance,” he adds. “Islamic banks hold a lot of liquidity as we know, and if they can deploy that into productive, socially impactful use, the whole economy will benefit.”

A recent joint survey held by SBP and the UK Department for International Development identified an “overwhelming demand” for Islamic banking, regardless of whether or not the respondents were urban or rural. A huge majority (94.51%) came out in favour of the prohibition on interest, with 88.4% regarding contemporary bank interest as a similarly prohibited practice.Even non-banked respondents echoed the sentiment, at 98% and 93% respectively, and 62% of those who are banked would willingly pay more for Islamic banking products due to religious preferences.

As with other jurisdictions worldwide, however, the shift towards contactless and e-wallet transactions is strengthening the hand of the non-bank sector too. This has not been lost on SBP which, in 2019, responded by enabling “electronic money institutions” access to Pakistan’s payments ecosystem. It is only a matter of time before the pace of innovation injected into the sector will transform people’s payment habits across the country.

Facing the future with confidence

As the world starts to deal with the economic fallout from the coronavirus pandemic – which, in many countries, is still in full flow – Pakistan’s financial sector seems to have shown a healthy degree of resilience in the face of the shock of 2020. SBP puts this down to capital buffers put in place over the long term to strengthen the banks’ position. The higher capital adequacy ratio (CAR) of 19.5% at the end of September 2020 put Pakistan beyond the minimum local and global requirements for its banking system. Liquidity has also been uninterrupted following state interventions to support key parts of the economy during this period.

From this position of strength, therefore, Pakistan is able to focus on at least three priorities among many that will shape its financial sector into a growing force for the economy: continued digital transformation, affordable lending instruments for housing, and programmes to reduce the gender gap in access to finance.

On the digital front, the Digital Pakistan Policy and the National Financial Inclusion Strategy are two initiatives that hold promise in the battle to reduce the informal economy and make FinTechs a productive addition to the domestic market. In particular, the launch of Raast, an instant digital payment system, will be an innovative step forward in reducing citizens’ reliance on cash while making transactions cheaper.

Long-term property lending policies – where SBP has given mandatory lending targets to banks on their housing portfolios and developers are being offered incentives – should help boost a sector badly in need of modernisation to benefit future homeowners.Third is the launch of SBP’s Banking on Equality Strategy, where a “gender lens” will be applied to the industry to ensure increased financial access for women based on a set of approved measures.

When viewed in the context of an often-turbulent history, there’s little doubting the progress made to date in Pakistan’s journey of banking and finance. The policies, commitment, and liquidity – three factors crucial to any developing economy – should herald a more prosperous and dynamic economy well into this century.

No one left behind

According to State Bank of Pakistan (SBP), women are disproportionately underserved by the country’s financial system. With only around 25% of bank accounts held in the name of women (even fewer are actually active), it has been widely accepted by government that economic development cannot be achieved without a healthier approach to reducing the gender gap. The bank has therefore created a policy entitled Banking on Equality: Reducing the Gender Gap in Financial Inclusion to ensurea manageable but proactive shift towards women-friendly business practices. The draft policy was presented in December 2020 for consultation.